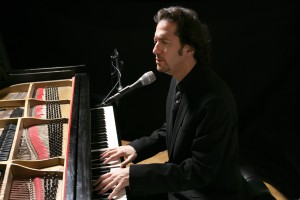 Keyboardist/composer/bandleader MICHAEL WOLFF has an extensive resume in the Jazz world, having played with the likes of Cannonball Adderley, Sonny Rollins, Wayne Shorter and Christian McBride. But Wolff doesn’t limit himself to Jazz; he’s conducted and written orchestral arrangements and backed Warren Zevon. On his new album, Love & Destruction, he delves into Pop, AltRock and World music, filtering it through his astute, Jazz-based arrangements. Along with originals like the New Orleans tribute “Underwater,” Wolff also takes on some eclectic cover selections on Love, including a trickling version of Radiohead’s “Everything In Its Right Place,” slinky, lounge versions of the Stones’ “Miss You” and Donovan’s “Mellow Yellow” and a torchy spin on Beck’s “Everybody’s Got To Learn Sometime.” Love & Destruction is Wolff’s first foray into singing, and his low-key croon tastefully delivers the melodies with some subtle, crafty juxtapositions. Wolff and his band swing through downtown’s Hyatt Regency Hotel, performing for a special Saturday night edition of the popular “Jazz at the Hyatt” music series. Tickets are available through jazzincincy.com. (See Music.)