Pianist Michael Wolff has some of the most expansive vision of anyone working in jazz today. Born in the California High Desert, raised in New Orleans and now making his home in Manhattan, the well-traveled, big-eared Wolff is never short on surprises for his listeners. With his dazzling Impure Thoughts ensemble on hiatus, Wolff’s two current albums up the ante beyond that band’s extraordinary work. 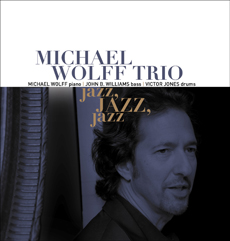 Recorded in some spare studio time after Impure Thoughts’ session for Intoxicate (Indianola Music, 2001), jazz, JAZZ, jazz is a revelatory acoustic trio date with bassist John B. Williams and drummer Victor Jones. The men decided to have some fun interpreting standards in their own way, and they display a wise understanding of the album’s audience: Wolff has a habit of cutting away bits and pieces of the melodies, recognizing that most anyone who buys this album is already deeply familiar with the themes. Set free from pat melodic exposition, the trio concentrates instead on harmonic, rhythmic and emotional explorations of the tunes.

“Autumn Leaves” and “My Funny Valentine” receive creative new twists that invigorate two of the most overdone songs in the canon. Yet the trio’s interpretations are always enjoyable, even fascinating. The last cut, Ron Carter’s “Einbeinstrasse,” doesn’t really qualify as a standard; it’s simply one of Wolff’s favorite numbers, and it receives a barn-burning treatment that closes out this excellent album on a high note. 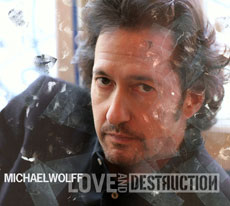 Of another tack entirely, although just as brilliant, is Love And Destruction. This is the first Wolff album to feature his vocals at such a high profile, and he is an impressive interpreter in that regard as well. His matter-of-fact, easy delivery the inclusion of Leonard Cohen’s “Hallelujah” is telling is an ideal complement to the material, which includes a number of originals. “Tell Me”, the lead-off song, is passionate and compelling, featuring the African Children’s Choir in support of Wolff and the band. “Underwater” is a wrenching meditation on the hurricane disaster in New Orleans. While the album will inevitably appeal more to pop audiences than the jazz crowd, it offers a wealth of gems for all comers.

Typical of Wolff’s expansive vision, Love not only includes a number of surprising inclusions Radiohead’s “Everything In Its Right Place,” old friend Warren Zevon’s “Hostage O” it also demonstrates Wolff’s mind-boggling hand at re-interpreting old material. “Stop! In The Name Of Love” is given a melancholic flavor that, to my ears, is much better suited to the lyric content than the original Motown rave-up. The Rolling Stones’ “Miss You,” the New Orleans standard “Ya Ya,” even Donovan’s goofy “Mellow Yellow,” are each mutated into nearly brand-new entities that honor the songwriters’ creativity while moving the material into the 21st century.

The varying ensemble is highlighted by guitarist John Guth, drummer Mike Clark, and Wolff’s B3, Rhodes and Steinway piano. An essential album of 2007.

Tracks: Tell Me; Falling In Love; Almost Everything; Everything In Its Right Place; Underwater; Hallelujah; Ya Ya; Stop! In The Name of Love; Miss You; Mellow Yellow; Tango; Hostage O; Everybody’s Got To Learn Sometime.