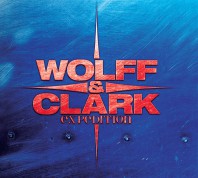 Join the Wolff & Clark Expedition at Jazz at Lincoln Center’s swanky Dizzy’s Club Coca-Cola for a night of bluesy, grooving music and good times as we celebrate the release of their debut album, “Wolff & Clark Expedition” on Random Act Records. On Thursday, February 28th, 2013, two sets at 7:30 and 9:30pm, we will be featuring an amazing band with fresh arrangements and compositions, you’ll be sure to be moving your feet by the end of the night. We recommend you make reservations and bring your friends! END_OF_DOCUMENT_TOKEN_TO_BE_REPLACED

Check out Michael’s masterclass feature in the September 2012 issue of Downbeat Magazine. You can download a digital copy of the issue for free at www.downbeat.com.

Read a review of Michael’s live recording session at Vitello’s by Michael Katz. The review is available online at irom.wordpress.com.

On January 29th, 2012 the Third Annual Composer’s Concordance Festival was held at the DROM in New York City. Wolff opened the night with his original classical composition “Three Movements To Scale” featuring Franz Hackl on trumpet and Dan Barrett on cello.