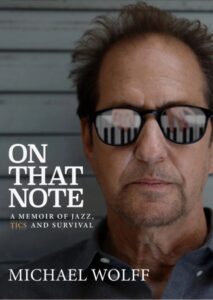 Michael Wolff’s memoir “On That Note: A Memoir of Jazz, Tics and Survival” is set to be released on March 15, 2022 online and in select book stores.

In his rare, guileless and amazingly symphonic memoir, Mr. Wolff cracks open his soul, and deftly melds one kind of keyboard (QWERTY) with another (piano) . . . treating us to his singularly cool, masterfully improvisational style.  The music/the voice is one of pure jazz — the message is one of hope, healing and survival.

Michael Wolff may have been the first true jazz genius I met in my career. I got to know him on tour with the great Nancy Wilson. Michael helped to teach this young, very green Cleveland comic, the show-business ropes! He was as bright and savvy a man as he was a musician! I’m so very glad he wrote this book because I want the world to know this unique musician, who stood by my side through every night of The Arsenio Hall Show. The story of his life has been a wild, amazing, and emotional ride!

Okay, here’s the thing about Michael Wolff and this book:  When I was reading it, I felt like I was right next to him. Jazz is mysterious to many of us, but to Mike, it’s like eating: Elemental, spicy, easy.  From a granular and hilarious remembrance of misspent youth in Mississippi, to a very original tale of making it in New York City—unpaid New Year’s Eve gig in a mausoleum, while living inside a shoebox–this book is a profound act of love and comedy in the name of Count Basie, Monk, Miles Davis, assorted underworld types and family.  Funny as hell and riveting to the end. If he were taller, I’d have liked it even more.

I met Michael Wolff more than 50 years ago. We were rehearsing with the Berkeley High Stage Band and I was having some issues blowing over rhythm changes. I asked Michael for advice, and he said: “just play the blues. . ..” It all fell into place.

They say that in jazz, there are no wrong notes. If you trip, you continue, and make your misstep look like you intended it. Michael has a true improviser’s approach to life and to everything that he does, and his book reflects that sensibility.

This book reveals Michael’s honest, no-holds-barred attitude. Fortunately for us, his is a history that is still in the process of unfolding.

Pianist Michael Wolff has had a remarkable career performing and recording with jazz legends such as Cannonball Adderley, Cal Tjader and Sonny Rollins, as well as leading his own groups. In On That Note, his profane and profound memoir, Wolff writes colorfully about overcoming adversity and about the rewards of a life in music. It turns out that the pianist is also a writer.

Wrapped inside this moving recovery memoir from a dire and rare cancer is a revelatory and deeply American story of a precocious musical prodigy who comes of age in 1960s Berkeley as a white Jewish kid who enters the magical archipelago of African-American jazz and becomes an accepted and admired part of the slipstream of the greatest music made possible by a culturally porous world.

Jazz piano maestro Michael Wolff has written an insightful, honest, searing memoir that moves the heart as poignantly as his piano solos do.  This Is not only a personal memoir but a history of pop culture, an exploration of race relations, and jazz music’s place within society.  It is both educational and inspiring.